Some researchers subvert the conventions of their discipline and the stereotypes of their profession. While this is part of my appreciation of Elinor Ostrom, more importantly she showed not only that collaborative management is possible, but that it can be done by “ordinary” people and in large groups.

Ostrom overturned a conventional presumption by demonstrating how “ordinary” people are capable of collaboratively managing natural resources, such as forests or fisheries or ground water basins. By creating rules and adjusting them on-the-go, people organise themselves in ways that match the complexity of the situation. Contrary to the tragedy of the commons theory, many natural resources have been sustainably used for centuries without the aid of external authority, external experts or market mechanisms. In some cases common ownership does not work. Here is where design principles come in. Underlying the diversity and complexity of institutions, Ostrom and her team found a number of principles that distinguish the successful from the non successful. While developed for collaborative management of natural resources, it may be possible to generalize them for the efficacy of cooperative groups. 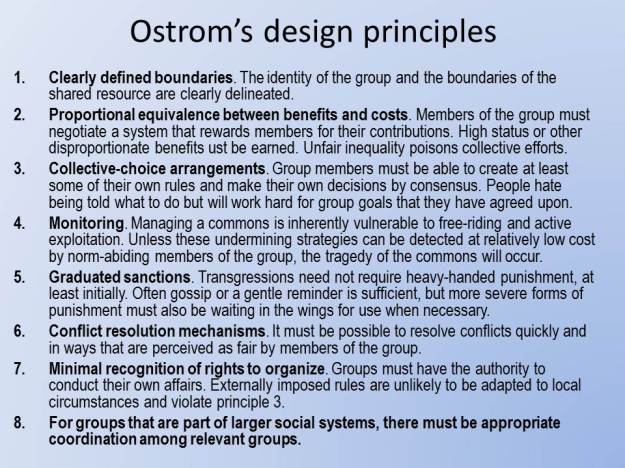 These design principles should be understood as essential points of attention in the design of horizontal organisations. They are general and can refer to very different arrangements in practice. What these arrangements have in common is that they are based on a model of cooperation (in contrast with subordination).

While Ostrom’s design principles are quite general and developed in a context of use of common resources rather than production, the search for design principles is interesting especially from a perspective of complexity theory. In my explorations of cooperative production I found an enormous diversity of organisational structures. Worker cooperatives based on the “one person = one vote” principle can have a fully decentralised structure, but most underwent processes of vertical and/or horizontal centralisation in various selective ways (loaning Mintzberg’s terminology). Self-organising systems based on highly autonomous individuals have different coordination structures: team based, between individuals or in a circle infrastructure (see also Frederic Laloux’s book in my post). How to grasp the influence of these diverse organisational structures on the subjective and objective empowerment of workers? How to get a sense of the tipping point between accepted & reversible delegation of power and embedded domination that elicits resentment or passiveness? Maybe design principles could give a clue when in the midst of organisational adaptation and redesign?

One other thing that I like about Elinor Ostrom is her unpretentiousness and use of simple language. In one presentation she said about the tragedy of the commons theory: “The presumption underlying this theory was that humans couldn’t figure out ways themselves of avoiding being suckers“. Here’s an other 2 minute impression:

Elinor Ostrom was the first woman to be awarded the Nobel prize in economic sciences, in 2009 (scientific background, from p. 9).

Elinor Ostrom coordinated a research workshop for more than 30 years and wrote a number of books. Her work on natural resource management is described in Governing the Commons. For an exploratory research I used part of her framework for analysis of the rules for collective decision making described in Understanding Institutional Diversity. If you’re interested in the use of multiple methods for the study of human behaviour, you can consult Working Together.